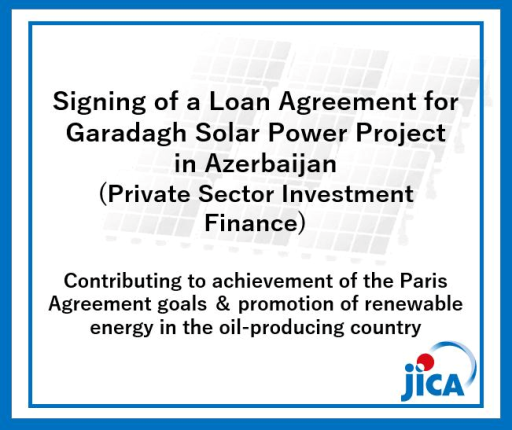 On August 2nd, the Japan International Cooperation Agency (JICA) signed a project finance loan agreement with “Masdar Azerbaijan Energy” Limited Liability Company (hereinafter referred to as “Borrower”), which has been implementing the Solar PV Plant Project in the Republic of Azerbaijan. This is the first project in Azerbaijan since the resumption of Private Sector Investment and Finance and is co-financed by the Asian Development Bank (ADB), the European Bank for Reconstruction and Development (EBRD), and the Abu Dhabi Fund for Development (ADFD).

Signing of a Loan Agreement for Garadagh Solar Power Project in Azerbaijan (Private Sector Investment Finance): Contributing to achievement of the Paris Agreement goals and promotion of renewable energy in the oil-producing country

Since its independence in 1991, Azerbaijan has achieved dramatic economic development led by oil and natural gas exploration, which in turn was achieved through the active introduction of foreign capital as well as through exports of such resources. The country’s energy mix is heavily concentrated on fossil fuels, with gas-fired power generation accounting for more than 90% of its total output of electricity (IEA’s projection in 2019), and the adverse environmental impact is high. The government is aiming to adhere to the Paris Agreement, and seeks to increase the share of renewable energy to 30% by 2030. This loan will support the accomplishment of these goals and ensure a stable supply of electricity. Furthermore, the urgent challenge is to develop photovoltaic power generation facilities near the Alat settlement in Gradagh while minimizing the fiscal burden by leveraging private sector investment. This project will contribute to the achievement of SDGs Goals 7 (Affordable and clean energy), 13 (Climate action), and 17 (Partnerships for the goals). This is the first large-scale solar power project (230MW) in Azerbaijan in which both construction and operation are to be carried out by a private company. The Borrower's sponsor, Abu Dhabi Future Energy Company PJSC (Masdar), is one of the largest developers of renewable energy projects in the Middle East. They are active in more than 40 countries and have extensive experience in renewable energy generation. As a model project, this undertaking is expected to attract future investment from private companies in subsequent similar projects in Azerbaijan and the Central Asia and Caucasus region. 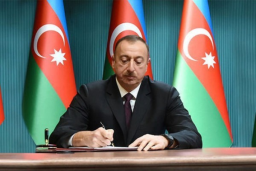 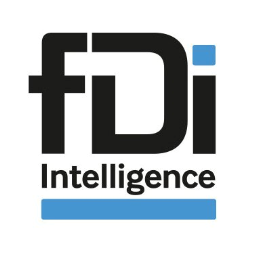