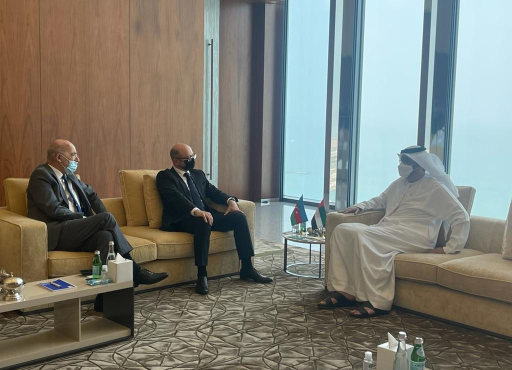 Energy Minister Parviz Shahbazov met with Sultan Ahmed Al Jaber, UAE Minister of Industry of Advanced Technology, Managing Director of Abu Dhabi National Oil Company, Chairman of Masdar within the World Utilities Congress.
The implementation of Garadagh Solar Power Plant founded in March this year, wind and solar power projects in Karabakh, as well as in the Caspian Sea, including the coastal islands, and the cooperation on green hydrogen and energy efficiency were discussed at the meeting.
The partnership with the United Arab Emirates and Masdar, which has a global reputation, in the implementation of green energy course of Azerbaijan was highly appreciated. It was stated that Garadagh Solar Power Plant paved the way for new collaborations between two countries. It was noted that Masdar is interested in being involved in the large scaled wind and solar power investment projects in Azerbaijan.
The sides exchanged views on new green investment opportunities during the conversation.